The Industrial Revolution changed the world of work from farms to factories is over. A new economy is needed. Jose Maria Figueres, former president of Costa Rica (1994-1998) and the first CEO of the World Economic Forum, has a plan to do just that. The Costa Rican West Point graduate—who broke up the audience when he noted his country has no army—is calling for a new global economy driven by reducing carbon emissions.

“The 200 years of the Industrial Revolution have ended,” Figueres told the University of Michigan audience as the speaker for the 14th annual Peter M. Wege Lecture in Sustainability. “It’s time to leave the carbon—the fossils and the coal and gas and oil in the ground.”

This former president led his native country into preserving more land per square mile—now 25% of Costa Rica—than any other nation proving his visionary thinking can become reality. The enthusiastic and entertaining Figueres sees his carbon-reduction economy as the ideal way to address climate change, poverty, and unemployment. Converting the world from systems that pollute the environment to an economy based on reducing carbon will create what he calls, “The greatest economic opportunities ever.”

Figueres sees a whole new realm of employment needed to develop technology that can pull carbon out of the atmosphere as the world converts to renewable energies. “We have the resources to do it,” he said, noting South Korea and Costa Rica are already doing it.

What needs to happen is a collaboration that includes governmental vision, private-sector participation, capital, a communications strategy, and centers of academic excellence. “Just like all of you in this auditorium,” he said about the academic centers pointing at the audience filled with University of Michigan students and faculty.

Jose Figueres doesn’t see climate change as the doomsday scenario often depicted, but rather as the gateway to an entirely new working world in carbon reduction that can make life better for everybody on Earth. 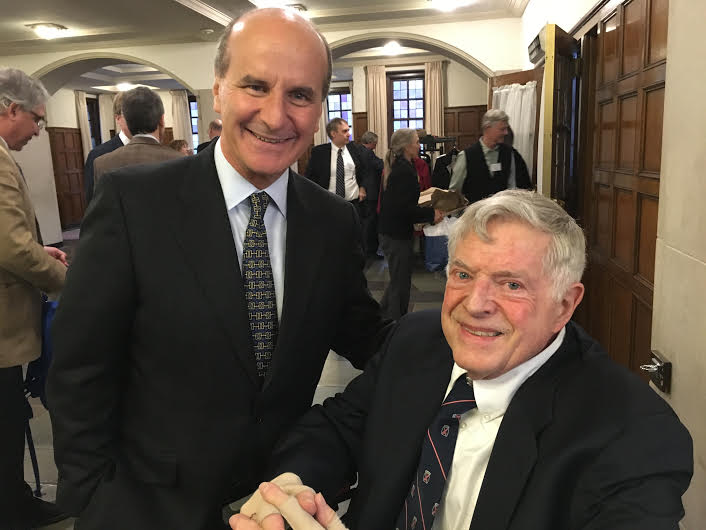 Jose Maria Figueres, former president of Costa Rica who delivered the 14th annual Peter M. Wege Lecture at the University of Michigan March 28, 2016, is pictured with Dr. Jonathan Bulkley, retired professor in the School of Natural Resources and the Environment and former co-chairman of the Center for Sustainable Systems.

In 2011 Peter M. Wege and The Wege Foundation created the Jonathan W. Bulkley Collegiate Professorship in Sustainable Systems to honor Dr. Bulkley’s distinguished career of 43 years at SNRE as well as the close friendship between Peter and the professor that began in 1991 and lasted until Wege died in 2014.

At the dinner following the lecture, SNRE faculty member Shelie Miller was announced as the first recipient of the five-year Bulkley Professorship. Dr. Miller’s most recent honor is a Jefferson Fellowship given by the National Academy of Science for a year’s assignment with U.S. Agency for International Development to end global poverty.

Jose Maria Figueres on the right is pictured after delivering the 14th Peter M. Wege Lecture on Sustainability at the University of Michigan. On his right is Dan Brown, new dean of the School of Natural Resources and the Environment; next to Brown is Dr. Shelie Miller who had just been announced as the first recipient of the Jonathan W. Bulkley Collegiate Professorship in Sustainable Systems given by the late Peter M. Wege and The Wege Foundation; on the left is Mark VanPutten, CEO of The Wege Foundation.
One of Dr. Miller’s many accomplishments is winning the highest award the U.S. government gives to young scientists called the Presidential Early Career Award for Scientists and Engineers.